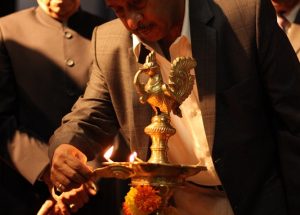 He spoke not only as a Judge and a lawyer but also a citizen of our esteemed country. He highlighted the difference between the quality of legal education and law colleges then and now. During his time, law was looked upon as a last resort, however, he conveyed his pleasure to note that in the present day, this conservative notion has undergone substantial changes. ‘I studied law in a jail,’ said he, while narrating to us the real life story of how he had studied in a village, where an old jail barrack had been assigned as the law building for the purpose of legal education. He especially pointed out that today, the five important ingredients that make a successful institution are- an understanding of management, a dynamic head of the institution, dedicated and committed faculty, disciplined students and cooperative parents. 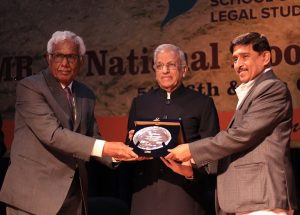 Coming from a background of adversity, he urged the students to make the best use of them just like he had. He significantly focused on the importance of self-resolution. Very humbly, he also admitted, that it was the prayers of the people who he had been compassionate towards, that had made him so successful. He said, ‘Rich people pay, poor people pray. Payment is valuable, prayer is invaluable. Prayer is more powerful than payment.’ As a Judge, he had always strongly believed that every law comes with a purpose. One may bend the law, with a human touch, for the sake of the intended social justice, but not break the law.

Hon’ble Justice Shivraj V. Patel’s words left a lasting impression on the minds of the students. Let us all aspire to have the three C’s that he so effectively spoke of: competence, character and compassion. After all, everybody needs to ask one question daily to be a better human being, “What should I do for my country today?”

At the outset of the ceremony, the welcome address was delivered by Prof. (Dr.) T. R. Subramanya, Dean, School of Legal Studies, CMRU. The Chief Guest, Hon’ble Mr. Justice K.N. Phaneendra, then presented his valedictory address where he highlighted the significance of knowledge, especially in the dynamic field of legal education. He also spoke on the inescapable duty that every individual needs to fulfil i.e. the duty of repaying the debt one owes to the society.

His speech was followed by that of Hon’ble Mr. Justice Krishna S. Dixit, who offered very helpful insights on the skill of advocacy. “Courts understand the language of law as theoretical physicists understand universal mathematics,” he said. Thus, arguments in a Court must be framed and delivered diligently. He also commended the participants for their excellent performance in the competition and conveyed his best wishes for their future endeavours.

Hon’ble Mr. Justice B.M. Shyam Prasad then inspired all with his belief in hard work. He directed the students to keep an inquisitive mind, and to treat every challenge as an opportunity. He concluded his speech with these motivating words, “You cannot tame the ocean, but work hard, be sincere, and you can definitely ride the tide.”

Ensuing his speech was an address given by Hon’ble Mr. Justice Budihal R.B., wherein he spoke very highly of the School of Legal Studies, CMR University, while also appreciating the relevancy of the moot problem that had been argued upon. He stressed upon the role of the advocates as agents of truth and carriers of justice.

Finally, Sri. Udaya Holla, was called upon to deliver his address. He instructed the students to foster a thirst for knowledge, for that is what makes a successful lawyer. Knowledge need not only be in the field of law, but a true lawyer must strive to have knowledge of all things existing under the sun. This, he believes, is the mark of an exemplary advocate.

His speech was followed by the most awaited function of the day- the declaration of the results. Symbiosis Law School, Pune, emerged as the winners of the National Moot Court Competition 2018 winning a trophy and a cash prize of Rs. 25000/-. The runners up were the participants from Pravin Gandhi College, Mumbai who also won a cash prize of Rs. 15000/-. 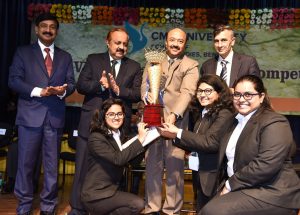 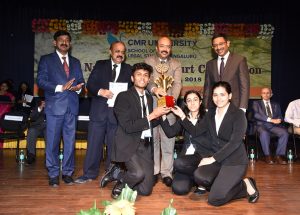 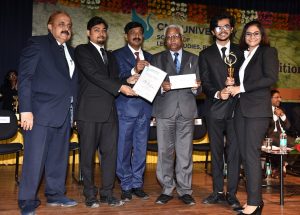 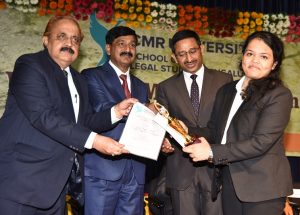 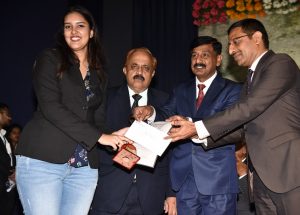 The 6th Edition of the National Moot Court Competition was deemed to be a grand success. With a Vote of Thanks delivered by Mr. V. J. Praneshwaran, Vice- Principal, School of Legal Studies, CMR University, the event finally came to a satisfying conclusion.