After serving for ten years two months and twenty-one days as Vice Chancellor, Prof. (Dr.) R Venkata Rao has laid down the office of Vice Chancellor, National Law School of India University, Bengaluru on 1st August 2019. After having relocated to Delhi, Prof. Rao has assumed the office of Chairperson, Vivekananda School of Law and Legal Studies and Vivekananda School of English Studies (Vivekananda Institute of Professional Studies, New Delhi) on 16th September 2019.

He has the distinction of serving the Statutory Bodies of almost all the Law Schools in the Country. Besides, he is a member of Board of Governors of Indian Institute of Corporate Affairs, New Delhi. He also served as Member, Governing Council Indian Law Institute New Delhi and Member, Academic Committee, Indian Institute of Public Administration, New Delhi. He has served as Independent Director in prestigious Public Sector Undertakings like, Bharat Electronics Ltd (BEL), Bangalore, Hindustan Aeronautics Ltd (HAL), Bangalore, Goa Shipyard Ltd, Goa. He is also a member of different committees in Bar Council of India and is associated with prestigious bodies like UPSC, State Service Commissions, UGC and NAAC among others.

He has the distinction of receiving Gold Medal for the Best Ph.D. Thesis from the Andhra University in 1993, the Best Researcher Award from the Andhra University in 2003, the Best Teacher Award from the Government of Andhra Pradesh in 2006, he has been awarded the “Best Vice Chancellor Award for Outstanding Contribution to Education” during the World Chancellors and Vice Chancellor’s Congress- 2014 held on 27th June 2014 at Mumbai, Amity University, Noida, awarded “Amity Academic Excellence Award” twice, once in 2017 for the most distinguished contribution towards propagation of doctrine of knowledge, at the 17th International Business Summit & Research Conference INBUSH-ERA and again in 2019. He has been awarded Prof. N.R. Madhava Menon Best Law Teacher Award for the year 2018 under the aegis of Society of Indian Law Firms (SILF) and Menon Institute of Legal Advocacy Training (MILAT) for outstanding services to the promotion of quality legal education. Prof. R. Venkata Rao has been awarded the Attorney General K. Parasaran Award in recognition of his Outstanding Scholarship in Legal Education by Capital Foundation Society, New Delhi on 1st September, 2019.

He has authored 6 books and published more than 130 papers.

He has successfully guided 3 LL.Ds and 20 Ph.Ds. He has visited more than 30 countries for his academic and research activities.

He was the Chairman, Board of Governors of Asia Law Institute (ASLI) for the year 2010-2011 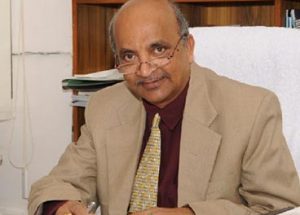