Prof. Dr. T.R. Subramanya is currently serving as the Dean of CMR University School of Legal Studies (w.e.f 4-4-2018), Bengaluru after serving as Coordinator & Research Fellow at the Centre for Regulatory Studies, Governance and Public Policy (CRSGPP) in The West Bengal National University of Juridical Sciences, Kolkata (2016-2018).

Prior to this, he was the Vice Chancellor of Karnataka State Law University, Hubballi (2013-2015). He has also been the Professor of International Law at West Bengal National University of Juridical Sciences; Vice-Chancellor (in-charge), Bangalore University; Dean and Chairman of the Faculty of Law, Bangalore University (2008-2010); Registrar (Evaluation) (2010-2012) and Registrar (in-charge) Administration of Bangalore University (2009). He has also served as the honorary member of the Karnataka State Law Commission. In the international level, Prof. Subramanya has served as Legal Counsellor to the Kingdom of Bahrain for over 7 years. In this capacity, he acquired considerable knowledge of the laws and legal systems of the Gulf Co-operation Council (GCC) States and in the practical application of international law at the municipal level.

As a student, Prof. Subramanya has had a distinguished academic career throughout. Having pursued M.A. (History) and LL. B with First Class and securing the first rank in his LL.M from the University of Mysore, he went on to secure an M.Phil. and Ph.D. Degree in International Law from the School of International Studies, Jawaharlal Nehru University, New Delhi (1993).

Apart from the innumerable papers published in a variety of National and Internationally renowned Journals, Dr. Subramanya initially published a book entitled ‘The Rights and Status of the Individual in International Law’ (1984) and edited another on ‘Human Rights in International Law’ (1986). His most recent book released in 2021 on ‘Hazardous Substances in India and the World: Legislations, Frameworks and Management’ is published by Routledge, United Kingdom in May, 2021. This book examines the nature of hazardous substances and the law governing them, including international conventions, relevant directives and Indian legislation from the pre-independence period to the present.

In 2009 he was he was awarded the Dr. Rajkumar State Award for services rendered in the field of education by the Dr. Rajkumar International Foundation, Bangalore and in September 2015 he was honoured with the Vijayavani National Educational Leadership Award for outstanding contribution in the field of education, besides several awards and honours bestowed by organisations all over the country.

He has published several scholarly articles in reputed journals and is currently the Editor in Chief for the UGC CARE recognised CMR University Journal for Contemporary Legal Affairs. He is a distinguished visiting professor for several Universities including the Symbiosis Law School, Pune and serves on the panel of advisors, board of studies, academic council and panel of examiners of several prestigious Law Schools. 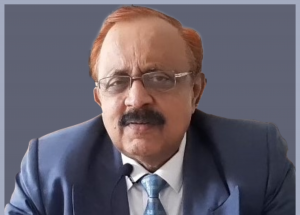